Wolf-blood is creeping over 28k now, with possible another 12k to go. Maybe more.  this could be another endless, endless wip like Fracture, lmao.  I do hope not though.

I’ve had a rest from it for a few days and started a short on space demons – with the exciting working title of Demons – which is clipping along at the moment.  This one will finish.  It’s probably a max word count of 15k.  I haven’t written anything that short in a while *grin*

I’m writing Fracture again.  Yes, I know, I’ve been writing the bloody story on and off for about a year, now…but I am determined this month to get it over and done with, lol 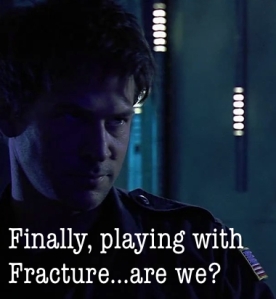 I was chatting last night about my Sven wips and someone asked me how I keep all the characters straight, as I often jump between wips.

I realised that the characters are just ‘there’ in my head. They seem to hang off their name. I can see what they look like and ‘feel’ their character. Don’t ask me what that means, I’m not too sure myself. I know what they would and wouldn’t say, how they feel about the other characters and what mess I’ve made of their lives, lol I know that Patrick from Fracture is a completely different entity from Cam, the hero of Pure Bond. It’s there as I think/type there name.

It also made me very aware of the fact that I am crappy at analysing my own stories, breaking them down and working out exactly what’s going on. I’m seriously envious of people who rattle off a systematic breakdown of what’s going on in every scene, how they point out how a certain section pushes the story this why or that.

I just can’t get my head around it. And believe me, I’ve tried! The plot and characters are an amorphous blob living in my head that I give shape to with words. Ask me anything more about it and I’ll just look at you like a slack-jawed yokel *sigh*

What? Something about this song always gets my adrenalin going…and I need that right now. As my 28th century heroes got to slay themselves some dragon… 😉

The hobbits stayed at Grandma Gandalf’s tonight, so The Ent is bonding with his own kind as he lays down a hardwood floor in the playroom.

And I got to write. Yay. Fracture hit 36k and I got hit between the eyes with an idea for 3 30k novellas *sigh*. They have a working title of Sous Chef, lmao and I have about 600 words on the first one.

So, I’m looking at Fracture and in a complete coincidence Sky One has started showing Stargate Atlantis again. What’s this got to do with anything, you cry?

Well, something about John Sheppard inspires the hero of Fracture and my subconscious is telling me to watch it. Honest, I have no say in it. At all… *smirk*

Anyway, as The Master slinks away to the background (no burning pyre for him, thank you very much) I get to play with Shep Icons again.

I got Lost Gods finished, the synopsis written and it all subbed. Yay

The current count for it is 50 890. So that’s two subs since Sven began on 1 March *grin*. I have an EC Jewel story that has to be in by 1 May but in the meantime I’m going to see if I can get a handle on another bugbear story, Fracture.

December was mostly a wash out. I probably got about 10000 words during the whole month.

So I made my resolution today to try to get back into my Sven routine. Fracture – which I’m going to read through right now – is a bit of a nightmare. I’ve got to about 16k on Chosen. But at the minute I’ve been inspired to tackle Lost Gods again.

I just hit 5104 words on that… So, I’m reinstigating my reward system *grin* The Colonel will be sharing the system with someone else in 2008… The Master.

So this is ‘The Suit” that jumped out at me while watching SGA Miller’s Crossing on Tuesday. I had a bugger of a time finding an image. In the end, I found some here .

It happened at the exact time that I was getting back into Fracture and everything in that episode resonated with my hero. This includes how Sheppard resolves the problem at the end. Not spoiling anything, but say hello to the darkside, John Sheppard. Joe Flanigan has apparently labelled his character a ‘pretty, pretty psycho princess’. My hero from Fracture? Yep, he’s going with the first three on that one, lol

So… I’m back to writing Fracture, LOL I’ve given into the fact that it’s a much longer story that I planned, and because of that I can also give into the general explosion of plot bunnies this story has generated. I’m still not certain whether it’s a 50/60k novel or 3 novellas. But now I’m officially half way through. I’ll write it and see.

My kidney pain has subsided, for the most part. I’m still getting the odd twinge. My ability to stay awake has seriously deteriorated though! Taking the hobbits to school and pre-school has me exhausted. Now what used to be writing time has turned into sleeping time *sigh*

I also had a release this week. It’s part of a winter anthology from Freya’s Bower.

A Winter’s Gift by Kim Rees
Siobhan Kerr has been dumped. Again. She has no clue why her love life is such a disaster. Mr Right is too often Mr Wrong. So she does what she always does when she screws up… she runs home.

Her friend Ethan Jacoby, is waiting. However, Ethan has his own agenda as he faces yet another of Siobhan’s collapsing relationships. And with the help of an ancient temple, he plans to prove to Siobhan that the right man is closer to her than she ever believed possible…

And go here for an excerpt.

One final thing I’ll be doing today…hunting for screen caps for Stargate Atlantis’ Miller’s Crossing. When I find them and post, you’ll see why… *smirk*