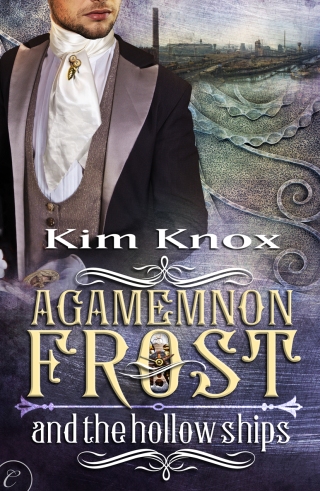 Edgar Mason is ready to embark upon his new life at Agamemnon Frost’s side. But all is not perfect. His Martian overlord, Pandarus, has implanted a dark voice in his mind, a voice that urges betrayal. And though Mason can keep close to Frost, there’s little room for romance under the watchful gaze of the engineers from Station X.

That changes when Mason and Frost reopen their investigation into their old enemy’s whereabouts. Posing as double agents and investigating cryptic rumors of “hollow ships,” they find him impersonating a London banker and worm their way into his confidence.

But their success brings them trouble in spades. Pandarus takes them into the belly of his ships, where he plans to transfigure them into mindless automata. And with Earth on the brink of invasion, Frost’s old flame Theodora reappearing and Pandarus’s brainwashing growing more effective, Mason and Frost will find their bond tested as never before.

See how it all began in Agamemnon Frost and the House of Death.

Nestor sank back into his chair, the wood and leather groaning under his weight. “We’ve been lucky. Damned lucky.” He wiped a hand over his face, and the strain showed through deep lines and sagging skin. The strain of trying to fight an impossibly powerful enemy. “Chance brought Achilles to me. And capturing the equipment from Holt Hall? More luck than we’ve had in years.”

Frost tutted and pushed his hands into the deep pockets of his dressing gown. He lifted his chin. “Consummate skill, Nestor. Bolstered by the bravery of the English soldier.”

The older man gave a rough laugh. “Of course.”

Frost frowned at the glass screen. “Hollow ships. That’s not a phrase connected to the aeolipile engines. It suggests something bigger than we’ve seen.”

Nestor briefly shut his eyes, and the low mutters breaking from him sounded very much like curses. “We’re insects pricking a rousing dragon. Pandarus has every advantage. Every single one. Weapons unlike any other. Unlike anything man could imagine. We can name only a few of his converted warriors. And Pandarus himself could be anyone. He could stand in this very room, in those unholy shells he creates, and I wouldn’t know him.” He stared at the screen and a vein throbbed in his temple. “But…we need to find these ships. Destroy them. Your charge is to track down Pandarus and stop him. If you don’t, England, the empire, the world will fall.”

“Simply a reminder for us all. Myself included. Keeps me focused.” He rubbed his thumb and forefinger over his creased eyelids. “Get some sleep.” His shoulders slumped for a moment. “You have two hours. Until we drag more words from that byzantine horror in the cellars of Holt Hall, we’re moving on what we can.”

“That it were.” Nestor turned. His face was grey from lack of sleep, but his gaze was firm. “Get him out of here, Patroclus.”

Mason moved to open the doors to the library and waited for Frost to precede him. The doors closed with a soft clunk on Nestor ordering Eurybates to rustle up coffee so thick he could stand his spoon in it.

In the silence of the corridor, Frost leaned against the wall. His head fell forward and he let out a soft groan. “Hours stuck with engineers more interested in how I work than with cracking the coded language.” He rubbed at his eye. “But that’s the modern age. An overweening obsession with fusing man and machine. It makes them similar to the Martians in many ways.”

Mason ached to put his hand on Frost’s jaw, to stroke his skin and tease his fingers over his lips. The doubt of touching and being touched by him had faded almost to nothing. Frost might have dragged him into this insanity, but Mason had learned to accept his future. And wanted the future that included more than the tempting trace of Frost’s skin, the warm hint of sandalwood and vanilla. A pleasure shared. They’d snatched only a few heated kisses, and his need for Frost, for bare skin and fingers, mouths and dicks, always simmered, especially when they were alone.

Before Eurybates followed Nestor’s orders, Mason acted, drawing a trembling line over Frost’s bristled jaw. “You need a shave.” His voice was thick, strained. Not enough, but the slightest touch of his skin sent a shock of pleasure through his flesh. It was why they had to be so cautious. “Sir.”

Frost pulled in a deep breath, his attention still fixed on the floor, but his body was tensed, his shoulders tight. His hands balled into white-knuckled fists. “A part of your new role involves seeing to my every need.” He looked up and the shine in his golden brown eyes stopped Mason’s breath. Frost could do that, drive every thought from his head with a single glance. “I’m certain you’re expert.”

The clanking of the turning handle broke them apart and Mason’s thudding heart slowed. He scrubbed at the back of his neck, dislodging the itchy collar. Frost grinned at him, his beauty, even in the shadow of the passage and after a night without sleep, a wonder to Mason.

Eurybates glanced at them, his eyes narrowing briefly before he scuttled away down the passage. Frost yawned, his hand covering his mouth. He shrugged at Mason’s lifted eyebrow.

“Your expertise will have to wait, I’m afraid.” Frost rolled his neck and groaned. “I’ve been awake more than a day. Even I need to sleep. Two hours. Then our orders are simple.” His voice became grim. “We have a Martian to kill.”