Narda is on a hunt.

Her target, Doran Van Evander has holed up on a mining planet. But her hunt won’t be simple or easy. Planet Lisala-7 is in the grip of a festival, one they’ve made compulsory. Five days of licensed debauchery and now with her body on fire from the touch of strangers, she must find her target before her time runs out. Failing is not an option. But in this game, who is the hunter and who is the prey?

The link is here

And Her Dark Soul has a cover! 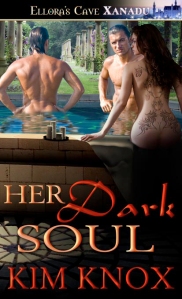 A man trapped by magic, an enigmatic guardian, and a virgin who will bind them all…

Ordered to secure a precious box from the priests of Fausta. Marek isn’t told a virgin ward is part of the deal. Ash’s innocence and need drive him to touch her, taste her, to take the twisted power in her flesh and energize his own. But hidden players force Marek into doing something unthinkable.

Lucas has been caught in gold for four hundred years. His new master commands him to invade Ash’s dreams and take her virginity. If he does, she’s breached and the treasure she guards will open. He’s happy to obey. However, he finds her guarded by a man unlike any other in his long life.

Ash should deny the fire in her blood, remember who and what she is, but something inside her finds them irresistible. As their lives intertwine, they’re driven to find pleasure, using their unique blend of sex and magic to fight an enemy that would consume them all.