It’s been *gulp* five years since Thrones of Desire released, but it’s always nice to get a review. Here’s the mention I get:

Also striking is Kim Knox’ [sic] At the Sorcerer’s Command, a tale of richly-sustained atmosphere and suspense in which a taboo sex act becomes a catalyst for a near-impossible feat of magic.

You can read the full review here

And At the Sorcerer’s Command is now available to buy on its own. 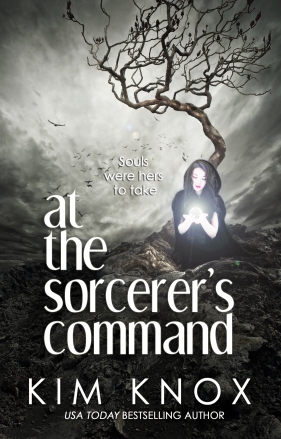 Miar is her people’s only hope to defeat the sorcerer who has besieged her home.
She has an unusual talent. She’s a soul-catcher, able to twist any soul to her will.
And Varun, the man who must guard her, is willing to use her and her gift anyway he can.

You can buy it in these places:

The air reeked of blood and tar, wrapping around me, mixing with the distant flared hiss of fire. I shivered. I should’ve been in my master’s rooms, hunting through ancient scrolls for a defence against the sorcerer, Kiritan. Not here, lost in a sea of tents flapping in cold, night winds. The creak and thwack of the timber-framed mangonels ran ice through my blood. I wasn’t a soldier. Far from it.

Panic whipped my nerves, my heart beating hard. I hadn’t volunteered for this sortie. I was an apprentice, barely that, with the first swell of magic in my blood. But I’d also shown another skill. A skill the Duke’s new paladin, Varun, commandeered as he fought back against the besieging army.

Varun’s low voice cut into my thoughts and he grabbed my arm. His strong fingers bit into muscle, their heat bleeding through the thin sleeve of my shirt. The familiar scent of leather, metal and skin wiped away everything else. He pulled me close and his breath brushed my temple. “You know the drill. Concentrate. Stay close. Try not to be stupid.”

I stiffened. “Then you should’ve left me behind.”

His grin burned, the heat of his mouth taunting me. There was that hint of a growl and it hollowed my legs. “I’m not letting you go, Apprentice Miar.”

His words sank into my belly, shoving aside my fear for a much darker want. I’d lusted after Varun from the minute he’d appeared in the Hall of Magic. Not that I could have him. My untouched body was promised to my master when my studies were complete. Payment for his skill and time.

Varun had only been weeks in the fortress. And I should never have met him. He did not believe in magic.

Kim Knox – Romance with a brew of sex, magic darkness and technology…