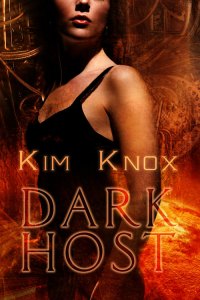 Feline Mosaic, Charis Sur, thought her mission aboard the INS Pagidion would be quick and easy. All she has to do is watch her target and keep him alive until Betelgeuse goes nova.

Simple. Until one of the passengers drops dead in front of her.

Suddenly everything is not simple. Her life depends on a successful mission and she has to protect her target from whatever killed this man. That throws her into the path of Jason Narak, the one man she never wanted to see again. The man who burned her six months before. Yet, even as her past with Jason hurls her mission, her life into disarray, Charis finds that…something…is waiting for them aboard the INS Pagidion.

It calls itself darkness. And it needs a host.

His scent hit me. The same one in Ciro’s stateroom; the one from the morgue. Him. Jason Narak—the one man immune to me. The one man I never wanted to see. Ever.

I planted a fist in his face.

Jason staggered back. He brushed his mouth and stared at the dark stain of blood on his fingers. “I’ll allow you that.” His gaze narrowed. “But that is all I will allow.”

I snorted. “You couldn’t take me then. Now’s no different.”

The slow-drawled words flushed heat through my skin. I pushed down the forbidden, carnal memories Jason Narak always stirred and glared at him. “So now you’re hired help? Nice to see you so reduced.”

“What are you doing on this ship?”

“As if I’m going to discuss my business with a lackey.”

Jason’s mouth thinned. “We’re going somewhere private.” He took my arm. His dark hand burned against my pale skin and I tried to hold down the shiver at his touch. “Do you object?”

“And always the bristling little cat, aren’t you, Charis?”

His words had me stumbling after him. They sounded too much like the words of the consciousness holding Ciro. What was Jason’s involvement in all of this? His scent was everywhere. “What are you really doing here?”

He stopped before Quinn’s stateroom, only a few strides from where that man was eating. Palming open the door, he pulled me inside. I wrenched my arm free. “Well?”

“Sorry, wrong species.” And I stayed standing where I was.

“Fine.” After ordering a healing pack from the initiator built into the far wall, Jason flopped into one of the chairs arranged as they had been in Ciro’s room to take advantage of the view of the star we orbited. He stared at the writhing mass of the red giant, his sharp face solemn. “I won’t allow you to stay on this ship.”

“Won’t allow? Who do you think you are?”

His dark eyes fixed on me and their cool authority itched. He crumpled the pack and it dissolved. It had healed his cut and swollen lip. “I am Lord Admiral Quinn’s private secretary. And that makes me a very influential man.”

Jason smiled and my stomach clenched. He was beautiful; a part of me could never deny that. “Always your playful little attacks. So feline.”

He turned back to the star, the smiled faded. “You don’t know what I am.”

I rolled my eyes. “Please, not the mysterious and forbidden thing again. I’ve seen your Mosaic, Jason. Clouded leopard, mau and a light mix of jaguar are all you can lay claim to.”

“What do you think?” Anger had my blood hot. The urge to shift was overwhelming. I curled my hands into tight fists and willed the change down, but the resentment still burned. “I made the mistake of trusting you. I believed you were working for the Company. But no, you were just working me.”

“Yes, I worked you.” His head tilted. “Why? What else did you think I was doing?”